The Eidolon
By Libby McGugan 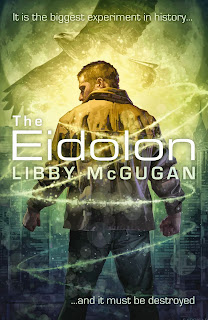 Mixing science, philosophy and espionage, Libby McGugan’s stunning debut – The Eidolon – is a thriller like no other.

A former flying doctor and veteran of the Second Gulf War, McGugan’s first novel calls into question the very nature of reality in a contemporary SF adventure that explores deep ideas but with an edge-of-the-seat story line featuring dark matter, the CERN laboratory, and the barrier between the dead and the living.

Following the death of her father in 2007 McGugan was inspired to explore the conversations they shared about life and death further, even basing one of the characters on him.

When physicist Robert Strong loses his job at the Dark Matter research lab and his relationship falls apart, he returns home to Scotland. Then the dead start appearing to him, and Robert begins to question his own sanity.

Victor Amos, an enigmatic businessman, arrives and recruits Robert to sabotage CERN’S Large Hadron Collider, convincing him the next step in the collider’s research will bring about disaster. Everything Robert once understood about reality, and the boundaries between life and death, is about to change forever. And the biggest change will be to Robert himself...


About the Author
Libby McGugan was born 1972 in Airdrie, a small town east of Glasgow in Scotland, to a Catholic mother and a Protestant-turned-atheist father, who loved science. She enjoyed a mixed diet of quantum physics, spiritual instinct, George Lucas and Steven Spielberg. Her ambition was to grow up and join the Rebel alliance in a galaxy Far, Far away. Instead she went to Glasgow University and studied medicine.

A practising doctor, she has worked in Scotland, in Australia with the Flying Doctors service and, for a few months, in a field hospital in the desert. She loves travelling and the diversity that is the way different people see the world, and has been trekking in the Himalaya of Bhutan, potholing in Sarawak, backpacking in Chile and Europe, and diving in Cairns.