Had another cardio appoitment on Wednesday. Still looking for "The Final Solution" that doesn't include an ending I don't want!
Posted by BARRY R. HUNTER at 12:57 AM No comments:

Sorry to have been absent, but I have hospital stays over the last two weeks for heart related issues, I am trying to work my way back to a "normal" routine (whatever that is).

I am on a new medication regiment and am still working out the kings.

I will try to do better, but give me some time.

I appreciate all of you and hope you understand.
Posted by BARRY R. HUNTER at 12:31 AM No comments:

Some secrets are better left buried…

Geologist Petra Dee arrives in Wyoming looking for clues to her father’s disappearance years before. What she finds instead is Temperance, a dying Western town with a gold rush past and a meth-infested present. But under the town’s dust and quiet, an old power is shifting. When bodies start turning up - desiccated and twisted skeletons that Petra can’t scientifically explain - her investigations land her in the middle of a covert war between the town’s most powerful interests. Petra’s father wasn’t the only one searching for the alchemical secrets of Temperance, and those still looking are now ready to kill. Armed with nothing but shaky alliances, a pair of antique guns, and a relic she doesn’t understand, the only thing Petra knows for sure is that she and her coyote sidekick are going to have to move fast, or die next.

Laura Bickle grew up in rural Ohio, reading entirely too many comic books out loud to her favorite Wonder Woman doll. After graduating with an MA in Sociology – Criminology from Ohio State University and an MLIS in Library Science from the University of Wisconsin-Milwaukee, she patrolled the stacks at the public library and worked with data systems in criminal justice. She now dreams up stories about the monsters under the stairs, also writing contemporary fantasy novels under the name Alayna Williams.

Her work has been included in the ALA’s Amelia Bloomer Project 2013 reading list and the State Library of Ohio’s Choose to Read Ohio reading list for 2015-2016. THE HALLOWED ONES and THE OUTSIDE are her latest young adult novels
Posted by BARRY R. HUNTER at 1:22 AM No comments: 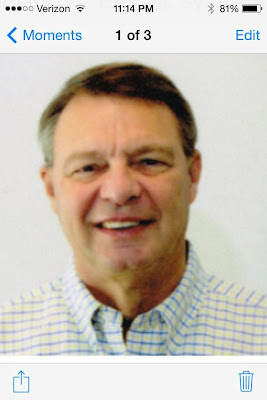 Funeral services for my brother-in-law, Robert (Bob) C. Christian will be held at 2pm in Greensboro, Georgia. He was 68 and has suffered from diabetes, was on dialysis and died from complications as well as a heart attack.

Please pray for the family and all of those traveling to the funeral.

He will be missed. He is survived by his wife, two daughters and their husbands, his sister, three grandchildren, and other nieces and nephews.

Sir Terry Pratchett Leaves Us Far Too Early At Age 66

Terry Pratchett has left us. This is copyright by Suvudu.

It is with the heaviest of hearts that I write these words.

Sir Terry Pratchett, author of the amazingly brilliant and hilarious Discworld novels, has passed away at the age of 66 years old.

It is a dark day for those who read his work, darker still for those who knew him. Because Sir Terry Pratchett was one of the most brilliant authors to write in the history of our genre. He began his foray into Discworld in 1983 when he published The Colour of Magic, a short novel that would go on to build a magnificently large and rich world comprised of about forty volumes. And it is in those novels where Sir Terry Pratchett will now wait for us whenever we need him.

Rhianna Pratchett, his daughter, and his UK publisher Penguin Random House have confirmed the sad news with a statement from Larry Finlay, MD at Transworld Publishers:
I was deeply saddened to learn that Sir Terry Pratchett has died. The world has lost one of its brightest, sharpest minds.
In over 70 books, Terry enriched the planet like few before him. As all who read him know, Discworld was his vehicle to satirize this world: he did so brilliantly, with great skill, enormous humour and constant invention.
Terry faced his Alzheimer’s disease (an ’embuggerance’, as he called it) publicly and bravely. Over the last few years, it was his writing that sustained him. His legacy will endure for decades to come.
My sympathies go out to Terry’s wife Lyn, their daughter Rhianna, to his close friend Rob Wilkins, and to all closest to him.”
Terry passed away in his home, with his cat sleeping on his bed surrounded by his family on 12th March 2015. Diagnosed with Posterior Cortical Atrophy in 2007, he battled the progressive disease with his trademark determination and creativity, and continued to write. He completed his last book, a new Discworld novel, in the summer of 2014, before succumbing to the final stages of the disease.
We ask that the family are left undisturbed at this distressing time.
A Just Giving page donating to the Research Institute to the Care of Older People (RICE) has been set up in his memory: https://www.justgiving.com/Terry-Pratchett

It is not easy talking about death, harder still to talk about our impending own. But Sir Terry Pratchett did so with the same wry sense of humor and tenacity that he wrote with, bringing awareness to the disease that took him from us and us from him. He created innumerable and wonderful characters during the time he sat at his computer, but it is his character that we celebrate now—his courage, his strength, and his ready laugh.

My thoughts and care go out to his family, who were with him at his passing. And in the end, he had three last simple messages to share on Twitter, the capitalized words below how the author portrayed the character of Death in his novels:
AT LAST, SIR TERRY, WE MUST WALK TOGETHER
Terry took Death’s arm and followed him through the doors and on to the black desert under the endless night.
The End

I’ve never hated reading “The End” so much as I do right now.

A manager at the Roudebush Veteran Affairs Medical Center in Indianapolis appears to mock the mental health problems of returning combat veterans in an email to her employees.

The email obtained by The Indianapolis Star contains photographs of a toy Christmas elf posing as a patient in what appears to be the hospital's transitional clinic for returning veterans. In one photograph, the elf pleads for Xanax. In another, he hangs himself with an electrical cord.

The woman who sent the email is Robin Paul, a licensed social worker who manages the hospital's Seamless Transition Integrated Care Clinic. The clinic provides returning veterans with transition assistance, including mental health and readjustment services.

When initially asked about the email, Paul responded, "Oh my goodness." She then referred a reporter to the hospital's public affairs department, which emailed The Star a statement on her behalf.

"I would like to sincerely apologize for the email message and I take full responsibility for this poor judgment," Paul said. "I have put my heart and soul into my work with Veterans for many years. I hold all Veterans and military personnel in the highest regard and am deeply remorseful for any hurt this may have caused."


Julie Webb, a Roudebush spokeswoman, said administrators were made aware of the email "a couple of months ago."

"The email is totally inappropriate and does not convey our commitment to veterans," she said. "We apologize to our veterans and take suicide and mental health treatment seriously, striving to provide the highest quality."

Paul remains employed at the hospital and continues to manage the clinic, earning an annual salary of $79,916. She received a $2,000 performance bonus in 2013, records show. More recent bonus information was not immediately available.

The Dec. 18 email was sent to the "IND STICC Team" with the subject, "Naught Elf in the STICC clinic."

"So, photos have appeared that indicate that the STICC clinic may have been invaded," the email says. "Looks like this magical character made his way through a few areas."

One photo depicts the elf peering between the legs of a female doll. "Trying his skills as a primary care provider (doing a pap)," the email says.

Another shows the elf next to a sticky note with the words, "Out of XANAX -- please help!" A caption says, "Self-medicating for mental health issues when a CNS would not give him his requested script."

A third photograph shows the elf hanging from a strand of Christmas lights. "Caught in the act of suicidal behavior (trying to hang himself from an electrical cord)," the email says.

It is unclear from the email whether other VA employees were involved in the joke, but a note visible in one photo appears to include directions about passing the elf to others.

Webb said she didn't know how many employees were involved.

The email surfaces as the nation grapples with an epidemic of veteran suicides. An estimated 22 veterans commit suicide in the United States every day, according to the VA.

"It is a slap in the face to our recent and past veterans suffering from mental health issues every single day," said Ken Hylton, commander of the Indiana Department of the American Legion. "These men and women went to war and do not deserve this type of ridicule. This is a disgusting display of mockery. This is supposedly someone who is caring for our veterans, and we in the Indiana American Legion are disgusted."

He called for an investigation and the "immediate dismissal of this government employee and all of those who received this correspondence and said nothing."

Paul Rieckhoff, founder and CEO of Iraq and Afghanistan Veterans of America, has lobbied for federal legislation intended to help stem veteran suicides.

"We hope it's an isolated incident," he said. "We hope this person has been dealt with aggressively because we're in the middle of a suicide problem."

The suicide crisis has prompted action from Congress and President Barack Obama.

In December, the Sexton Act was signed into law as part of a national defense bill. It requires annual mental health assessments for all service members, maintains privacy protections and requires the Pentagon to evaluate existing military mental health practices. Authored by Donnelly, it is named after Jacob Sexton, a 21-year-old Indiana National Guardsmen from Farmland who shot himself in the head at a Muncie movie theater while home on a 15-day leave from Afghanistan.

The issue of veteran suicide is a personal one for Gregg Keesling of Indianapolis. His 25-year-old son, Chancellor, shot himself in Baghdad in 2009, two weeks into his second tour.

He called the email "wrong," but stopped short of calling for terminations.

"It's very inappropriate, but I can understand it -- making light of something awful because it's so awful," he said. "I think it's a way of coping with things."

Still, he said, "They are trying to be funny. It's not. ... Somebody should get in trouble. Maybe not fired, but taken out to the woodshed, as they say."
Posted by BARRY R. HUNTER at 11:55 PM No comments:

My brother in law, Robert C, Christian, passed away last night, March 7 from complications of diabetes and a heart attack while undergoing dialysis. ;He was 68 and leaves my wife, his wife two daughters and three grandchildren.