An elderly Floridian called 911 on his cell phone to report that his car has been broken into.

He is hysterical as he explains his situation to the dispatcher:'

They've stolen the stereo, the steering wheel, the brake pedal and even the accelerator!' he cried.

The dispatcher said, 'Stay calm... An officer is on the way.'

A few minutes later, the officer radios in 'Disregard.' He says. 'He got in the back-seat by mistake.'
Posted by BARRY R. HUNTER at 12:00 AM No comments:


Three sisters, ages 92, 94 and 96, lived in a house together. One night the 96-year-old draws a bath. She puts her foot in and pauses. She yells to the other sisters, 'Was I getting in or out of the bath?'

The 94-year-old yells back, 'I don't know. I'll come up and see.' She starts up the stairs and pauses 'Was I going up the stairs or down?'

The 92-year-old is sitting at the kitchen table having tea listening to her sisters, she shakes her head and says, 'I sure hope I never get that forgetful, knock on wood...'

She then yells, 'I'll come up and help both of you as soon as I see who's at the door.'

Three retirees, each with a hearing loss, were playing golf one fine March day.
One remarked to the other, 'Windy, isn't it?'

A little old lady was going up and down the halls in a nursing home.

As she walked, she would flip up the hem of her nightgown and say 'Supersex’.

'She walked up to an elderly man in a wheelchair and flipping her gown at him, she said, 'Supersex’.

'He sat silently for a moment or two and finally answered, 'I'll take the soup.'

Two elderly gentlemen had been friends for many decades. Over the years, they had shared all kinds of activities and adventures. Lately, their activities had been limited to meeting a few times a week to play cards. One day, they were playing cards when one looked at the other and said, 'Now don't get mad at me .... I know we've been friends for a long time, but I just can't think of your name!'

I've thought and thought, but I can't remember it. Please tell me what your name is.'

His friend stared at him for at least three minutes -- he just stared and stared at him. Finally he said, 'How soon do you need to know?'
Posted by BARRY R. HUNTER at 12:00 AM No comments:


As a senior citizen was driving down the freeway, his car phone rang.

Answering, he heard his wife's voice urgently warning him, 'Herman, I just heard on the news that there's a car going the wrong way on Interstate 77. Please be careful!

Two elderly women were out driving in a large car - both could barely see over the dashboard. As they were cruising along, they came to an intersection. The stoplight was red, but they just went on through. The woman in the passenger seat thought to herself ' I must be losing it. I could have sworn we just went through a red light.'

After a few more minutes, they came to another intersection and the light was red. Again, they went right through. The woman in the passenger seat was almost sure that the light had been red but was really concerned that she was losing it. She was getting nervous.

At the next intersection, sure enough, the light was red and they went on through. So, she turned to the other woman and said, 'Mildred, did you know that we just ran through three red lights in a row? You could have killed us both!'


A woman who had been married three times walked into a bridal shop and told the sales clerk that she was looking for a wedding gown for her fourth wedding.

"Of course, madam," replied the sales clerk, "exactly what type and color dress are you looking for?"

The bride-to-be said, "A long frilly white dress with a veil."

"Please don't take this the wrong way, madam, but such dresses are usually more fitting for the first time bride who is more innocent in the ways of life, if you get my meaning."


"WELL!", replied the customer, a little peeved at the clerk's directness. "I can assure you that a white gown would be quite appropriate. Believe it or not, despite all my marriages, I remain as innocent as a first-time bride.

You see, my first husband was so excited about our wedding, he had a heart attack due to an unknown congenital condition as we were checking into our honeymoon hotel.

My second husband and I got into such a terrible fight in the limo on our way to our honeymoon hotel that we had that wedding annulled immediately and never spoke to each other again."

"What about your third husband?"

"That one was a Democrat," said the woman, "and every night for four years, he just sat on the edge of the bed and told me how good it was going to be, but nothing ever happened." 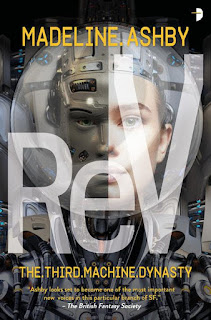 The long-awaited third book in the acclaimed Machine Dynasty series

The rapture for which the vN, self-replicating humanoids, were engineered, has finally come to pass. Now that the failsafe that once kept vN from harming humans has been hacked, all vN are discovering the promise – and the peril – of free will.

With her consciousness unleashed across computer systems all across the world, the vicious vN Portia stands poised to finally achieve her lifelong dream of bringing humanity to its knees. The old battle between her and her granddaughter Amy comes to an epic conclusion in the war for the very systems that keeps the planet running. Can Amy get her family to the stars before Portia destroys every opportunity for escape and freedom?

Available from your favorite book seller.
Posted by BARRY R. HUNTER at 12:00 AM No comments: 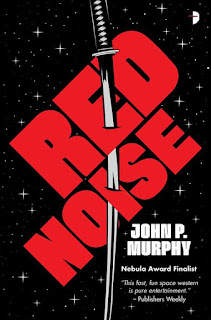 Call her Jane if you need a name.

Broke and out of fuel, a wildcat asteroid miner comes to Station 35 looking to sell her cargo and get back to the life of solitude that she craves. Instead, the cheating thieves who run the place leave her deep in debt.

Desperate to get away, she finds herself swept up in a three-way standoff between gangs and crooked cops. Faced with the decision to take sides or clean out the Augean Stables, she breaks out the grenades...

Available from your favorite book seller. 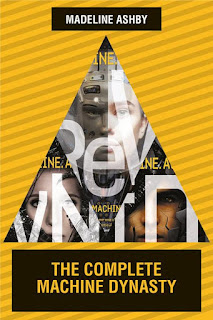 For the first time, the complete epic sci-fi masterwork from the visionary mind of Madeline Ashby is collected in a single digital omnibus!​

The Machine Dynasty Omnibus includes the complete text of vN, iD, and ReV, as well as an exclusive foreword from Patrick Thaddeus Jackson, and an introduction from Anne Lauppe-Dunbar.