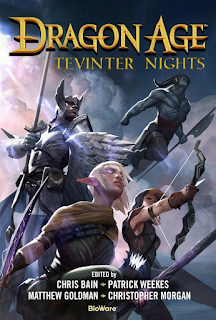 An anthology of original stories based on the dark fantasy, role-playing video game series from Bioware.

From the stoic Grey Wardens to the otherworldly Mortalitasi necromancers, from the proud Dalish elves to the underhanded Antivan Crow assassins, Dragon Age is filled with monsters, magic, and memorable characters making their way through dangerous world whose only constant is change.

CHAPEL OF EASE by Alex Bledsoe 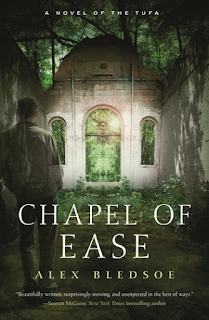 When Matt Johansson, a young New York actor, auditions for Chapel of Ease, an off-Broadway musical, he is instantly charmed by Ray Parrish, the show's writer and composer. They soon become friends; Matt learns that Ray's people call themselves the Tufa and that the musical is based on the history of his isolated home town. But there is one question in the show's script that Ray refuses to answer: what is buried in the ruins of the chapel of ease?

As opening night approaches, strange things begin to happen. A dreadlocked girl follows Ray and spies on him. At the press preview, a strange Tufa woman warns him to stop the show. Then, as the rave reviews arrive, Ray dies in his sleep.

Matt and the cast are distraught, but there's no question of shutting down: the run quickly sells out. They postpone opening night for a week and Matt volunteers to take Ray's ashes back to Needsville. He also hopes, while he's there, to find out more of the real story behind the play and discover the secret that Ray took to his grave.

Matt's journey into the haunting Appalachian mountains of Cloud County sets him on a dangerous path, where some secrets deserve to stay buried.

ALEX BLEDSOE is the critically-acclaimed author of the Tufa novels The Hum and the Shiver, Wisp of a Thing, Long Black Curl, Chapel of Ease, Gather Her Round, and Sadieville as well as the Eddie LaCrosse series: The Sword-Edged Blonde, Dark Jenny, Burn Me Deadly, and He Drank, and Saw the Spider.

"With his subtle, character-driven approach, Bledsoe skillfully fuses music, legend, and regional atmosphere to create something that feels like an unexplored corner of American mythology." – Publishers Weekly 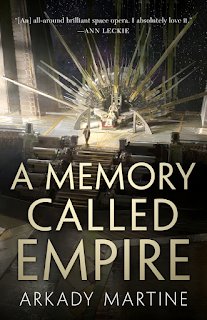 Ambassador Mahit Dzmare arrives in the center of the multi-system Teixcalaanli Empire only to discover that her predecessor, the previous ambassador from their small but fiercely independent mining Station, has died. But no one will admit that his death wasn't an accident—or that Mahit might be next to die, during a time of political instability in the highest echelons of the imperial court.

Now, Mahit must discover who is behind the murder, rescue herself, and save her Station from Teixcalaan's unceasing expansion—all while navigating an alien culture that is all too seductive, engaging in intrigues of her own, and hiding a deadly technological secret—one that might spell the end of her Station and her way of life—or rescue it from annihilation.

"A Memory Called Empire perfectly balances action and intrigue with matters of empire and identity. All around brilliant space opera, I absolutely love it."—Ann Leckie, author of Ancillary Justice

"The most thrilling ride ever. This book has everything I love."—Charlie Jane Anders, author of All the Birds in the Sky

Arkady Martine is a speculative fiction writer and, as Dr. AnnaLinden Weller, a historian of the Byzantine Empire and a city planner. Under both names, she writes about border politics, rhetoric, propaganda, and the edges of the world. Arkady grew up in New York City and, after some time in Turkey, Canada, and Sweden, lives in New Mexico with her wife, the author Vivian Shaw. You can find her online at arkadymartine.net and on Twitter as @ArkadyMartine.

CITY IN THE MIDDLE OF THE NIGHT by Charlie Jane Anders 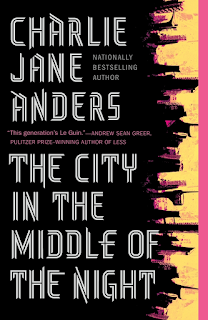 Charlie Jane Anders, the nationally bestselling author of All the Birds in the Sky delivers a brilliant new novel set in a hauntingly strange future with #10 LA Times bestseller The City in the Middle of the Night.

WOULD YOU GIVE UP EVERYTHING TO CHANGE THE WORLD?

Humanity clings to life on January—a colonized planet divided between permanently frozen darkness on one side, and blazing endless sunshine on the other.

Two cities, built long ago in the meager temperate zone, serve as the last bastions of civilization—but life inside them is just as dangerous as the uninhabitable wastelands outside.

Sophie, a young student from the wrong side of Xiosphant city, is exiled into the dark after being part of a failed revolution. But she survives—with the help of a mysterious savior from beneath the ice.

Burdened with a dangerous, painful secret, Sophie and her ragtag group of exiles face the ultimate challenge—and they are running out of time.

WELCOME TO THE CITY IN THE MIDDLE OF THE NIGHT.

“A breathtaking work of imagination and storytelling… making the case for Anders as this generation’s Le Guin.” —Andrew Sean Greer, Pulitzer Prize-winning author of Less

"An intimate portrait of people as much as it is a piece of culturally aware social scifi — a look at our moment in history through a distorting lens of aliens and spaceships." —NPR

"Tragic, brave, and so very human...Anders dares to imagine something different, a better way forward." —Den of Geek

CHARLIE JANE ANDERS is the former editor-in-chief of io9.com, the extraordinarily popular Gawker Media site devoted to science fiction and fantasy. Her SF and fantasy debut novel, All the Birds in the Sky, won the 2017 Nebula Awards for Best Novel and was a finalist for the 2017 Hugo Award's Best Novel category. Her Tor.com story "Six Months, Three Days" won the 2013 Hugo Award. She has also had fiction published by McSweeney's, Lightspeed, and ZYZZYVA. Her journalism has appeared in Salon, the Wall Street Journal, Mother Jones, and many other outlets. 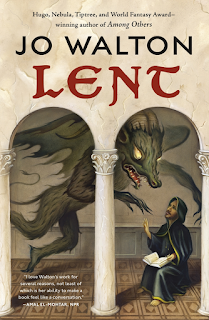 From Hugo, Nebula, and World Fantasy Award-winning author Jo Walton comes Lent, a magical re-imagining of the man who remade fifteenth-century Florence—in all its astonishing strangeness.

Young Girolamo’s life is a series of miracles.

That’s only the beginning. Because Girolamo Savanarola is not who—or what—he thinks he is. He will discover the truth about himself at the most startling possible time. And this will be only the beginning of his many lives.

"By itself, a fascinating meditation on the choices which alter lives and the course of history; in the context of Walton's other novels, positively mind-bending."—Kirkus, starred review

“Fantasy doing with beautiful assurance what straight historical fiction can't, putting us right inside the gorgeous idea-thrilled, demon-haunted imaginarium of the Renaissance—and making the best case for Savonarola in about 500 years.”—Francis Spufford, Costa Award-winning author of Golden Hill, on Lent

JO WALTON won the Hugo and Nebula Awards in 2012 for her novel Among Others. Before that, she won the John W. Campbell Award for Best New Writer, and her novel Tooth and Claw won the World Fantasy Award in 2004. The novels of her Small Change sequence—Farthing, Ha'penny, and Half a Crown—have won acclaim ranging from national newspapers to the Romantic Times Critics' Choice Award. A native of Wales, she lives in Montreal.

FOR ALL KOREAN WAR VETERANS

This has been postponed due to the CORVID19 problem and will be rescheduled at a later date.

Hosted by the Consulate General of the Republic of Korea in Atlanta, Pleasant Valley South Baptist Church, and the Georgia Department of Veterans Service.

The Consulate General of the Republic of Korea in Atlanta and the Georgia Department of Veterans Service are partnering to say “Thank You” to Korean War Veterans for their honorable military service and personal sacrifice by hosting a special medal and certificate ceremony. This event will involve the presentation of the Republic of Korea’s Ambassador for Peace Medal and Georgia’s Korean War Veteran Certificate of Honor.

Every Georgia veteran with honorable service during the Korean War (June 25, 1950 to July 27, 1953) is eligible to receive this certificate and peace medal lapel pin (This includes veterans with service in-country and those who were stationed elsewhere in other capacities).

It is also available for veterans who participated in the United Nations Peacekeeping Operations through December 31, 1955. Korean War Veterans may also receive this honor posthumously. The Ambassador for Peace Medal was originally presented as a special memento to those American veterans who returned to Republic of Korea through the “Revisit Program.” The honor was expanded to veterans who have been unable to participate.

The State’s Certificate of Honor is personalized with the Korean War veteran’s name, rank, branch of service, and dates of service printed over the Seal of the State of Georgia and includes the official Korean War logo. These certificates are signed by Governor Brian Kemp and GDVS Commissioner Mike Roby.

Interested in Attending ? Here’s What We Need from You: