The first in Douglas’ brand new, thrilling Andromedan Dark series, the book follows the crew and passengers of the Tellus Ad Astra, led by Lord Commander Grayson St. Clair. On a mission to the center of the galaxy, the ship never makes it. Sucked into a black hole en route, the ship emerges four billion years later. Earth is a distant memory, and the Andromeda Galaxy is drifting into the Milky Way. Oh, and St. Clair must keep more than one million souls aboard the Tellus safe from hostile brain-sucking, space-warping aliens who appear to be composed of dark matter.

Douglas’ wild imagination fused with his advanced scientific speculation elevates this new series to intergalactic heights! Packed with action and suspense, ALTERED STARSCAPE reminds fans—both new and old alike—why a Douglas novel is a must have for sci-fi readers.

Ian Douglas is the author of the popular military SF series The Inheritance Trilogy, The Heritage Trilogy and The Legacy Trilogy. A former naval corpsman, he lives in Pennsylvania.

2162. Thirty-eight years after first contact, Lord Commander Grayson St. Clair leads the Tellus Ad Astra on an unprecedented expedition to the Galactic Core, carrying more than a million scientists, diplomats, soldiers, and AIs. Despite his reservations about their alien hosts, St. Clair is deeply committed to his people—especially after they're sucked into a black hole and spat out four billion years in the future.

Civilizations have risen and fallen. The Andromeda Galaxy is drifting into the Milky Way. And Earth is a distant memory. All that matters now is survival. But as the ship's Marines search for allies amid ancient ruins and strange new planetary structures, St. Clair must wrap his mind around an enemy capable of harnessing a weapon of incomprehensible power: space itself.

“Well researched and quite imaginative.”—CNN.com on Europa Strike

“Ian Douglas is one of the masters of military science fiction.”—SF Revu on Deep Space

“The action is full-blooded and almost nonstop, yet the well-developed background is surprisingly rich and logical.
…As immersive as it is impressive.”—Kirkus Reviews (starred review) on Deep Space
Posted by BARRY R. HUNTER at 12:09 AM No comments: 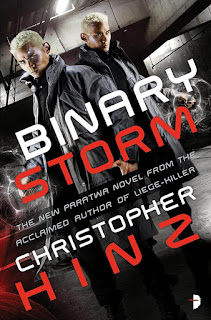 "A genuine page-turner, beautifully written and exciting from start to finish… Hinz presents this material with the assurance of classic sf and the vividness of the new masters… Don’t miss it.”
- Locus 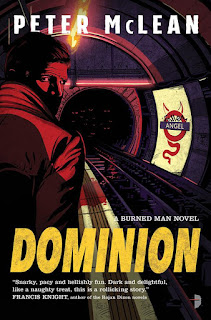 Interests:
Magic and the occult
Sharks
Tanith Lee
Fine ales
History
Posted by BARRY R. HUNTER at 12:00 AM No comments: 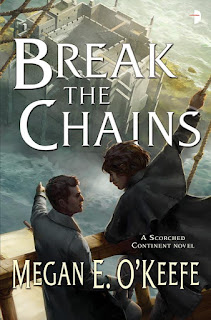 
A year has passed since Detan set the skies above Aransa on fire, and the armies of Aransa’s new dictator Thratia are preparing to knock on the door of his aunt’s city, Hond Steading…

As the city that produces the most selium – that precious gas that elevates airships and powers strange magic – Hond Steading is a jewel worth stealing. To shore up the city’s defenses, Detan promises his aunt that he’ll recover Nouli, the infamous engineer who built the century gates that protect the imperial capital of Valathea. But Nouli is imprisoned on the Remnant Isles, an impervious island prison run by the empire, and it’s Detan’s fault.

Detan doesn’t dare approach Nouli himself, so his companions volunteer to get themselves locked up to make contact with Nouli and convince him to help. Now Detan has to break them all out of prison, and he’s going to need the help of a half-mad doppel to do it.

Praise for Break the Chains:

“I am so glad to say that this book lived up to my pretty high expectations perfectly. I loved it. Detan is back and just as cocky as ever.”
- Ever the Crafter 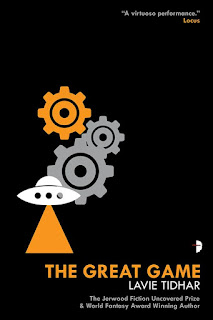 As a 19th century unlike our own comes to a close, Mycroft Holmes is found murdered outside his London club. It is up to retired shadow executive Smith to track down the killer – only to stumble on the greatest conspiracy of his life. Strange forces are stirring into life around the globe, and in the shadow game of spies nothing is certain.

In The Great Game, World Fantasy Award winning author Lavie Tidhar concludes his epic trilogy of a Victorian era that could never have been: filled with literary references galore, not to mention airship battles, Frankenstein monsters, alien tripods and death-defying acts. It is a world where nothing is certain – not even death.

And furthermore… venture deeper into the Lost Files of the Bookman Histories in this 2016 edition, as Professor Tidhar explores the ‘Dynamics of an Asteroid’!

Praise for The Great Game:
“Achieves moments of surprising depth and beauty, with real insights into human history and psychology as well as the immense and varied wealth of writing in the last half of the 19th century. It’s a virtuoso performance.”
- Locus 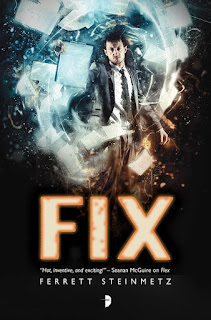 “America’s long sent its best SMASH agents overseas to deal with the European crisis. As of today, they decided dismantling your operation was more important than containing the Bastogne Broach. Now you’re dealing with the real professionals.”

Paul Tsabo: Bureaucromancer. Political activist. Loving father. His efforts to decriminalize magic have made him the government’s #1 enemy – and his fugitive existence has robbed his daughter of a normal life.

Aliyah Tsabo-Dawson: Videogamemancer. Gifted unearthly powers by a terrorist’s magic. Raised by a family of magicians, she’s the world’s loneliest teenager – because her powers might kill anyone she befriends.

When Paul accidentally opens up the first unsealed dimensional broach on American soil, the Unimancers lead his family in a cat-and-mouse pursuit all the way to the demon-haunted ruins of Europe – where Aliyah is slowly corrupted by the siren call of the Unimancers…

“I’m so hooked to this series, but that’s hardly the half of it. Ferrett continues to shock and amaze and simply improve upon everything he’s accomplished so far.”
- Brad K Horner

Interests:
Magic: the Gathering
Pokemon Go
Setting people on fire (no, really. He teaches classes on it)
Overly elaborate puns
Posted by BARRY R. HUNTER at 12:00 AM No comments: 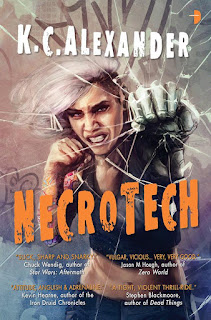 Interests:
Mass Effect
Pineapples
Feminism and kicking the patriarchy's ass
Posted by BARRY R. HUNTER at 12:00 AM No comments: 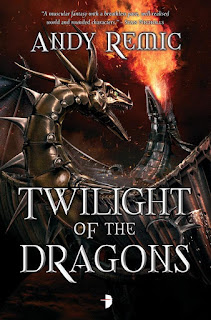 
During a recent dwarf civil-war deep under the Karamakkos Mountains, the magick-enslaved dragonlords have broken free from centuries of imprisonment and slaughtered tens of thousands throughout the Five Havens before exploding from the mountain and heading in fire and vengeance for the lands of Vagandrak.

Two once-noble war heroes of Vagandrak – Dakeroth and his wife Jonti Tal, an archer and scholar, the Axeman, the White Witch and a Kaalesh combat expert find themselves in a unique position: for they have discovered the ancient dragon city of Wyrmblood, and a thousand unhatched dragon eggs.

Dakeroth and his companions must work with their enemies, Skalg and the Church of Hate, in order to bring down the dragonlords and save the world of men and dwarves. But there is no bartering with these ancient dragons; for they seek to hatch their eggs and rebuild the cruel Wyrmblood Empire of legend.

Praise for Twilight of the Dragons:

"Twilight of the Dragons is undeniably brutal and uncompromising, but it is also completely engrossing...Remic has successfully out Remic’ed himself. Most impressive."
- The Eloquent Page