THERE ARE A LOT OF PEOPLE WHO KNOW THIS. BUT I DID NOT KNOW CHRIS WAS WRITING THIS BIOGRAPHY (?) OF HIS FATHER.

ANDY OFFUTT AND I WERE FRIENDS FOR YEARS THROUGH SCIENCE FICTION CONVENTIONS, PERSONAL CORRESPONDENCE AND HIS FIGHT, ALONG WITH KARL EDWARD WAGNER, WITH CONAN PROPERTIES OVER THEIR INTERPRETATION OF CONAN IN THE BOOKS THEY WERE HIRED TO WRITE FOR THEM. THAT PERIOD OF OUR LIVES IS A STORY THAT WILL NEVER BE WRITTEN BECAUSE I WAS ONLY A MINOR PLAYER IN THAT BARYON WAS USED AS AN EXAMPLE AS DECAMP THOUGHT HE WAS ALWAYS RIGHT IN HIS TUNNEL VISION OF CONAN.

BUT THIS THE OTHER SIDE OF THE COIN, SO TO SPEAK; ANDY'S OTHER PERSONA WAS WIDELY KNOWN IN THE SCIENCE FICTION FIELD. IT WAS NOT A PROBLEM FOR US. MOST WERE NUBILE TEENAGERS GETTING AN EDUCATION IN SEX BY READING HIS BOOKS. I WAS OLDER THAN A LOT OF FANS AND ANDY ANDY I WOULD TALK ABOUT ALL OF HIS WRITING IN OUR CONVENTION VISITS.

WHEN ANDY PASSED ON, I REALIZED I HAD LOST A GOOD FRIEND AND WRITER, BUT AFTER READING THIS ARTICLE, I DISCOVERED THAT I HAD LOST A LEGION OF FRIENDS.

THANKS TO CHRIS FOR THE WRITING OF THIS BOOK. IT IS NOW ON MY NEED TO BUY LIST.

THIS IS REPRINTED FROM THE ESQUIRE DAILY NEWSLETTER. THE COPYRIGHT IS LISTED AT THE END OF THE ARTICLE.

I HOPE THIS IS AS INTERESTING FOR YOU AS IT WAS FOR ME.

"I realized my dad was John Cleve, and he was the one writing those books with that pen name," Chris says. Chris' memoir, My Father, The Pornographer, out February 9, details what it was like growing up with a dad who wrote 400 books under 18 different pseudonyms. All but 30 of his books were pornography.

Before Andy died in 2013 of alcohol-induced cirrhosis, he sent a secret will to Chris, detailing what should be done with his 1,800 pounds of written pornography—both his own and others'—in the case of his death. When Andy died, Chris realized just how prolific his father had been. He writes in My Father, The Pornographer:

In 1968, Andy released his first pornographic novel, Bondage Babes, about a photographer who staged bondage scenes with models for mail-order magazines. Jodie Offutt's participation in her husband's budding pornography career didn't stop simply at encouragement. She acted as his typist, creating the final drafts to send out to publishers. In many ways, they were collaborators. "She would go and talk to him about things that pertained to females, because she obviously knew a lot more about that area than he did," Chris says.

The duo was methodological, churning out books as quickly as possible. Sometimes Jodie would be typing early chapters while Andy would work on the ending of the same book. The goal was one book a month. To speed up the creative process, Andy kept notebooks full of phrases divided into topics. For example, the section dedicated to breasts included descriptions such as, "love-swollen little buds," "nascent curves" and "quivering mounds." After using a term, he'd mark it out, so not to repeat it later novels.

When Chris was in high school, though, his dad slipped up and his private persona become public: He accidentally included a page from a porn-in-progress in a stack of papers for his secretary at the insurance agency to type. Word spread quickly through town and soon the whole high school was whispering about the Offutts.

"By the time I was in high school, it was like, 'There's the kid whose dad wrote dirty books,'" Chris says. "I could not get dates because of Dad's reputation in town."

Science-fiction conventions were an escape from the small-town gossip. In 1972, the Offutt family went on a road trip that included three different conventions. Andy's pornography work wasn't a secret to his sci-fi readers, and he was developing a passionate fanbase. He would spend part of the convention as himself, then he'd change into trendy clothes he'd ordered from catalogues and transform into John Cleve. Jodie's attire would complement Andy's personas. Chris writes in My Father, The Pornographer:

My parents cultivated a special con wardrobe. Dad dressed in dashikis or open-necked shirts with giant collars, zipper boots, wide leather belts, and flared pants. Mom wore short skirts and low-cut blouses that zipped up the front with no bra, high boots, and tight belts. John Cleve wore a long djellaba with nothing underneath, while mom wore a floor-length polyester gown. To complement Dad's leather-and-denim leisure suit, Mom had a leather miniskirt. My parents were a compelling pair, and I was awestruck by the figures they cut.

Chris lost his virginity to the daughter of another sci-fi writer at one of the conventions. Thanks to his dad, he was well-prepared. "We never talked about sex. We never had a birds and bees talk. He couldn't talk about it," Chris says. "But the books were so overt and detailed that I had a certain confidence. I believe I knew what to do. I didn't have that fear that a lot of young people in the '60s had of doing something wrong, making a mistake, hoping for the best. I'd read guide books."

He writes in his memoir that after sleeping with the girl at the convention she told him, "You're better than guys three times your age." But sex wasn't the only skill he picked up from his dad's side hustle. He also learned how to treat writing like a job. Eventually, Chris moved to Los Angeles, taught himself screenwriting and landed a gig writing for HBO's True Blood in 2006. Remember that first sex scene between Bill and Sookie in the first season? All Chris.

"There was a part of me that wanted to be like Dad but surpass him."

The Custodian of Marvels From Angry Robot Bookss 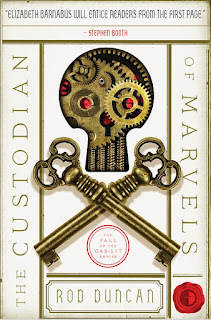 The Custodian of Marvels
https://twitter.com/RodDuncan

You’d have to be mad to steal from the feared International Patent Office. But that’s what Elizabeth Barnabus is about to try. A one-time enemy from the circus has persuaded her to attempt a heist that will be the ultimate conjuring trick.

Hidden in the vaults of the Patent Court in London lie secrets that could shake the very pillars of the Gas-Lit Empire. All that stands in Elizabeth’s way are the agents of the Patent Office, a Duke’s private army and the mysterious Custodian of Marvels.

Rod Duncan returns with the climactic volume of The Fall of the Gas-Lit Empire, the breathtaking alternate history series that began with the Philip K. Dick Award-nominated The Bullet-Catcher’s Daughter.

“An amazingly clever steampunk novel with a wonderfully imagined world and brilliant characters.”
– A Book Drunkard

“Readers who enjoyed the first two books will find much more of the same strong writing and nuanced characters in The Custodian of Marvels. Duncan has created a winner here and concluded the series masterfully.”
– Online Eccentric Librarian

About the author:
ROD DUNCAN is a published crime writer. His first novel Backlash was shortlisted for the CWA John Creasey Dagger, and he has since written three other novels (all Simon & Schuster UK), and had his first screenplay produced.
His background is in scientific research and computing, and he lives in Leicester.
You can find Rod online on Facebook or on Twitter. 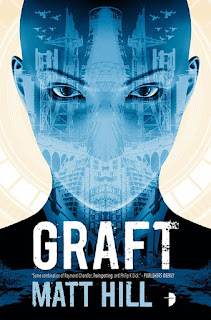 Hidden in the stolen car is a voiceless, three-armed woman called Y. She’s had her memory removed and undertaken a harrowing journey into a world she only vaguely recognises. And someone waiting in the UK expects her delivery at all costs.

Now Sol and Y are on the run from both Y’s traffickers and the organisation’s faithful products. With the help of a dangerous triggerman and Sol’s ex, they must uncover the true, terrifying extent of the trafficking operation, or it’s all over.

Not that there was much hope to start with.

A novel about the horror of exploitation and the weight of love, Graft imagines a country in which too many people are only worth what’s on their price tag.

“Hill captures the dark underbelly of Manchester in visceral prose. There is a unique horror in Y’s predicament, and Hill renders it in chilling terms. Hill’s world is tinged with a sense of foreboding in this refreshing take on a futuristic mystery.”
– Publishers Weekly

“Hill’s mean and broken future Manchester is pretty inimitable.You’ll meet some amazing characters navigating some profoundly dangerous situations in an environment of true weirdness that has a touch of the William Gibsons about it whilst at the same time presenting a science fiction that’s very personal, very British. In a word, it’s fantastic.”
– Nina Allen

About the author:
MATT HILL was born in 1984 and grew up in Tameside, Greater Manchester. After completing a journalism degree at Cardiff University, he trained as a copywriter. He now lives and works in London.
His first novel, The Folded Man, was runner-up in the 2012 Dundee International Book Prize.
You can find Matt online at his website, or on Twitter.

For all of you who like Alternate History, STRANGE CHANGES is now available from www.whortleberrypress.com and my book, Wonderful World of Baryon is still available, also. 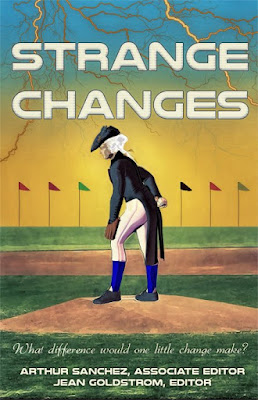 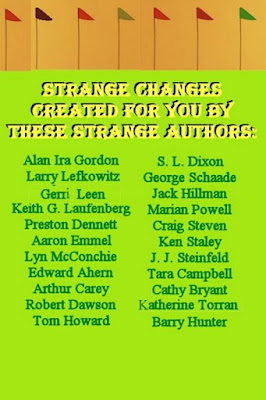