The Imaginary Corpse by Tyler Hayes 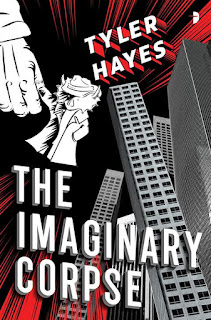 A dinosaur detective in the land of unwanted ideas battles trauma, anxiety, and the first serial killer of imaginary friends.

In a world where Toy Story meets Sin City, a dinosaur detective battles his own trauma and a remorseless serial killer hell-bent on shaking up an already messed-up town.

Tippy the triceratops was once someone’s best friend: a sunshine-yellow toy detective imagined to help make sense of the world. But inescapable tragedy forced Tippy to be set aside – still loved, still Real, but now abandoned. So he found a home in the underbelly of the imagination, a place called the Stillreal.

But friends keep disappearing here, and Tippy is left chasing a mysterious figure who can do the impossible – kill an idea. Permanently. With fear and anxiety already ripe on the streets of Playtime Town, Tippy must face his own demons before all that’s left is imaginary corpses.

Introducing a fantasy-noir of an entirely different breed…