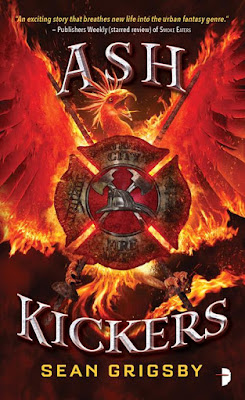 It's Dragons vs Firefighters vs the Phoenix.

With ex-firefighter Cole Brannigan in command of the Smoke Eaters, the dragon menace is under control. Thanks to non-lethal Canadian tech, the beasts are tranquilized and locked up, rather than killed. But for Tamerica Williams, this job filled with action and danger, has become tediously routine.

When a new threat emerges, a legendary bird of fire – the Phoenix – it’s the perfect task for Williams. But killing the Phoenix just brings it back stronger, spreading fire like a plague and whipping dragons into a frenzy. Will it prove to be too much excitement, even for Adrenalin-junkie Williams?
Posted by BARRY R. HUNTER at 9:50 PM