BY FIRE ABOVE by Robyn Bennis 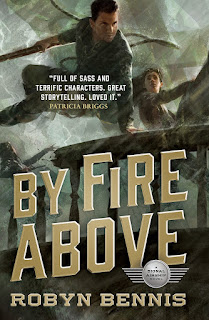 "All's fair in love and war," according to airship captain Josette Dupre until her hometown of Durum becomes occupied by the enemy and her mother a prisoner of war. Then it becomes, "Nothing's fair except bombing those Vins to high hell."

Before she can rescue her town, however, Josette must maneuver her way through the nest of overstuffed vipers that make up Garnia's military and royal leaders in order to drum up support. The foppish and mostly tolerated Mistral crew member Lord Bernat steps in to advise her, along with his very attractive older brother.

Between noble scheming, under-trained recruits, and supply shortages, Josette and the crew of the Mistral figure out a way to return to Durum—only to discover that when the homefront turns into the frontlines, things are more dangerous than they seem.

“Marvelous, witty and action-packed steampunk with exquisite attention to detail. Bennis's writing is incredible, her vocabulary impressive, and she honest to God made me believe you could build an airship from spare parts.”—New York Times and USA Today Bestselling author Ann Aguirre

“Bennis opens and closes with fierce combat sequences and layers in knotty questions about how to distinguish between loyalty and romance from love, and balance obedience to superiors with a duty to subordinates, all starkly highlighted by life-or-death decisions forced on the characters. Readers will hear both the crackle of musket fire and the heartfelt cries of honest self-admission in this rich adventure.” —Publishers Weekly

ROBYN BENNIS is a scientist and airship aficionado living in Madison, Wisconsin. By Fire Above is the sequel to her debut novel, The Guns Above.