The Outlaw & the Upstart King by Rod Duncan 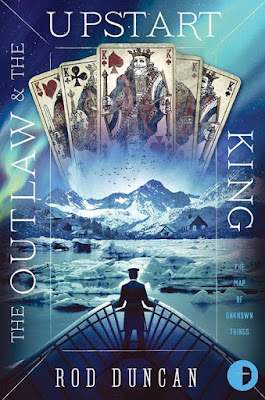 The Outlaw & the Upstart King by Rod Duncan

Elizabeth Barnabus returns, to uncover the secrets and mysteries of the Gas-Lit Empire, in the startling sequel to The Queen of All Crows.

As it is inked, so shall your oaths and bindings be.

Tattoos are the only law on the Island of the Free, and there can never be a king. Every clan agrees on that. But a returning exile has smuggled something across the water that could send the old ways up in flames.

Elias wants revenge on the men who severed his oaths and made him an outlaw. But, if his wealth and honour are to be restored, he’ll need help from the most unlikely quarter – a mysterious woman, landed unwontedly on Newfoundland’s rocky shore.