Bubba and the Cosmic Bloodsuckers by Joe Lansdale 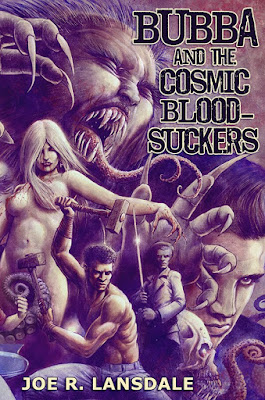 Before there was BUBBA-HO-TEP there was a little fracas between Bubba and an outfit of Cosmic Blood-Suckers. Only the mind of Joe Lansdale could create "hive-minded, shape-shifting, vampire-like creatures from a dark dimension who have taken up residence in a New Orleans junkyard."

If you visualize as you read (as I do), I tell you it would take some serious stretches of the imagination to picture the action in this book. That is part of the genius of Lansdale that he can take us on such wild journeys in multiple genres and please us so vividly in each of them.

Joe Lansdale need bow to no one in coining a phrase. He generally does more in one page than many authors do in several chapters. Being a son of the south and a devoted reader, I love each and every one of them. Elvis' team against the Blood-Suckers is led by Colonel Tom Parker, a strategist named Jack, Elvis; right hand man Johnny (who also chronicles things), a descendant of John Henry (the steel driving man), a blind man with exceptional and valuable sight, and a female recruit and new pop star named Jenny (stage named Raven).

Done correctly this could be one hell of a movie. It already is one hell of a book. Since it was written by Joe R. Lansdale it couldn't be any less than fantastic.
Posted by BARRY R. HUNTER at 3:53 PM