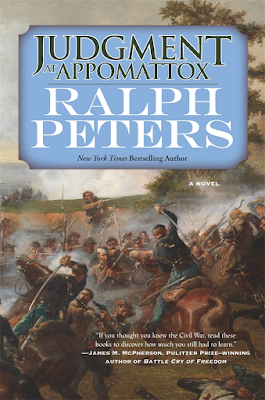 Written with the literary flair and historical accuracy readers expect from Ralph Peters, Judgment at Appomattox takes readers through the Civil War’s last grim interludes of combat as flags fall and hearts break.

A great war nears its end. Robert E. Lee makes a desperate, dramatic gamble that fails. Richmond falls. Each day brings new combat and more casualties, as Lee’s exhausted, hungry troops race to preserve the Confederacy. But Grant does not intend to let Lee escape. . . . In one of the most thrilling episodes in American history, heroes North and South battle each other across southern Virginia as the armies converge on a sleepy country court house.

Capping the author’s acclaimed five-novel cycle on the war in the East, this “dramatized history” pays homage to all the soldiers who fought, from an Irish-immigrant private wearing gray, to the “boy generals” who mastered modern war. This is a grand climax to a great, prize-winning series that honors—and reveals—America’s past.

“For those who want to truly understand what the war was like for the men who fought and endured it, there is no better reference than Ralph Peters’ five Civil War novels . . . superbly researched, richly imagined, brilliantly written.” —America’s Civil War

"Epic . . . battles explode from Ralph Peters' pen . . . with his five-novel masterwork—from Gettysburg to Appomattox—Peters has become one of our most important historians." —Washington Times

RALPH PETERS is an award-winning, bestselling novelist; a retired U.S. Army officer and former enlisted man; the author of numerous works on strategy; and a popular media commentator. In uniform and as a researcher and journalist, he has covered numerous conflicts and trouble spots, from Africa to the Caucasus, from Iraq to Pakistan.

Renowned for accuracy and authenticity, his Civil War writing, under his own name and as Owen Parry, has won numerous prizes, including the American Library Association’s Boyd Award (three times), the Hammett Prize, the Herodotus Award, the Grady McWhiney Award, and the Meade Society’s Order of Merit. Peters was the recipient of the 2015 Andrew J. Goodpaster prize as an outstanding American soldier-scholar, and in 2017 he was inducted into the U.S. Army's Officer Candidate School Hall of Fame.

His Civil War series, the Battle Hymn Cycle, spans five books: Cain at Gettysburg, Hell or Richmond, Valley of the Shadow, The Damned of Petersburg, and Judgment at Appomattox.