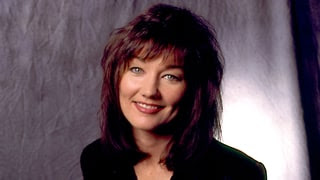 Lari White, a Grammy-winning singer-songwriter, producer and actress, has died in hospice care after a battle with advanced peritoneal cancer. She was 52. As a country artist, White scored six Top 20 country hits, including the Top 10 singles "That's My Baby," "Now I Know" and "That's How You Know (When You're in Love)." As an actor, she appeared opposite Tom Hanks in 2000's Cast Away.

Diagnosed last September with the rare form of cancer, which develops in the thin layer of tissue lining the abdomen, White suffered a series of complications and hospital visits, which she detailed in a post on Artistworks, where she had been teaching online vocal lessons. A GoFundMe page had been set up for the singer and her husband, musician and songwriter Chuck Cannon, to help the family with mounting medical expenses.

In addition to her recording career, White co-produced Toby Keith's 2006 LP White Trash With Money, as well as albums by Billy Dean and Shawn Mullins. On the big screen, she made a brief but memorable appearance in Cast Away and also had roles in the 2010 country-music drama Country Strong and the made-for-TV films No Regrets and XXX's & OOO's.

Born in Dunedin, Florida, White began performing gospel music at 4 years old with her parents. Although she lost the little finger on her left hand in an accident as a toddler, White played piano, entering talent contests and performing throughout the GulfCoast as a teenager. She studied voice at the University of Miami before moving to Nashville in 1988, where she won the TNN (Nashville Network) talent competition You Can Be a Star that same year.

A recording contract with Capitol led to the release of a single, "Flying Above the Rain," giving her a minor regional hit. Signing with Ronnie Milsap's publishing company, she wrote songs that were cut by Shelby Lynne ("What About the Love We Made") and Tammy Wynette ("Where's the Fire"), among others. She also began taking acting lessons and appeared in several plays and musicals around town. In 1992, White began touring as a back-up singer for Rodney Crowell. The following year, she released her debut LP for RCA, Lead Me Not, co-produced by Crowell with guitarist Steuart Smith. The following year, Wishes would prove to be her breakthrough album, with three consecutive Top Ten hits: "That's My Baby," "Now I Know," and "That's How You Know (When You're in Love)," featuring Hal Ketchum. "That's My Baby" and "That's How You Know" were co-written by White with Cannon, whom she married in April 1994. Her next LP, Don't Fence Me In, was issued in December 1995, with the Cole Porter-penned title cut featuring guest vocals from Shelby Lynne and Trisha Yearwood. A move to Disney-owned Lyric Street Records produced one LP, Stepping Stone, and contained her final Billboard singles chart entries, the Top 20 title cut, "Take Me," which was on the Bubbling Under the Hot 100 pop survey, and the minor hit "John Wayne Walking Away."

In 2004, White released the critically acclaimed R&B-flavored Green Eyed Soul, her first of two albums on her own Skinny White Girl label. The follow-up, 2007's My First Affair, was a live document of the diverse material she performed in her cabaret act at Manhattan's Algonquin Hotel. In February of last year, White's Old Friends, New Loves double-EP collection commemorated her 25th anniversary as a recording artist. Guest vocalists on the project included Delbert McClinton, Suzy Bogguss and Lee Roy Parnell, with Charlie Worsham contributing mandolin to the track "In God's Hands." As a songwriter, White had tunes cut by Keith, Patti Page, Pat Green, Danny Gokey and Sarah Buxton, among others. In 2014, she produced The Shoe Burnin': Stories of Southern Soul, a CD compilation combined with a book of short stories by various authors, including White herself.

White is survived by her husband, Chuck Cannon, and their three children.