A RISING “STAR” OF SCI-FI/ FANTASY

With the forthcoming release of Nine of Stars, critically acclaimed author Laura Bickle is first author to transition from Harper Voyager’s digital-original line to traditional print!

As the SFF industry begins to celebrate outstanding works of speculative fiction at the upcoming Locus and Hugo Awards, among others, Harper Voyager feels that Bickle’s books are equally outstanding and worthy of celebration! Says Harper Voyager Executive Editor, David Pomerico: “The critical attention of Laura’s work is what drew us to the books in the first place, and we feel Nine of Stars is a novel that showcases her talent at the highest level. Whether on the print or eBook list, Voyager is committed to publishing the very best speculative fiction, and with Laura’s writing, we felt we had a truly unique project we couldn’t wait to help find an even wider audience.”

Harper Voyager is incredibly proud and excited to be publishing Laura Bickle’s novels; her original contributions to the Harper Voyager Impulse line, Dark Alchemy and Mercury Retrograde, both received multiple starred and top-tiered reviews. Nine of Stars will revolve around many of the same characters that populated these prequel novels, although it will effectively function as the starting point for a great new series.

MORE ABOUT LAURA BICKLE:
Laura Bickle is an award-winning author of multiple works of YA fiction. She grew up in rural Ohio, reading entirely too many comic books out loud to her favorite Wonder Woman doll. After graduating with an MA in Sociology - Criminology from Ohio State University and an MLIS in Library Science from the University of Wisconsin-Milwaukee, she patrolled the stacks at the public library and worked with data systems in criminal justice. She now dreams up stories about the monsters under the stairs. Her work has been included in the ALA’s Amelia Bloomer Project 2013 reading list and the State Library of Ohio’s Choose to Read Ohio reading list for 2015-2016. More information about Laura’s work can be found at www.laurabickle.com.

MORE ABOUT NINE OF STARS: 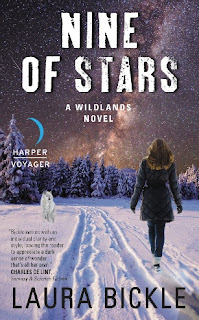 Winter has always been a deadly season in Temperance, but this time, there's more to fear than just the cold…

As the daughter of an alchemist, Petra Dee has faced all manner of occult horrors - especially since her arrival in the small town of Temperance, Wyoming. But she can't explain the creature now stalking the backcountry of Yellowstone, butchering wolves and leaving only their skins behind in the snow. Rumors surface of the return of Skinflint Jack, a nineteenth-century wraith that kills in fulfillment of an ancient bargain.

The new sheriff in town, Owen Rutherford, isn't helping matters. He's a dangerously haunted man on the trail of both an unsolved case and a fresh kill - a bizarre murder leading him right to Petra's partner Gabriel. And while Gabe once had little to fear from the mortal world, he's all too human now. This time, when violence hits close to home, there are no magical solutions.

It's up to Petra and her coyote sidekick Sig to get ahead of both Owen and the unnatural being hunting them all - before the trail turns deathly cold.
Posted by BARRY R. HUNTER at 3:22 PM