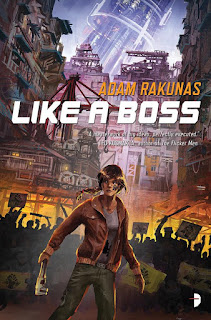 After buying her favourite rum distillery and settling down, she thought she’d heard the last of her arch nemesis, Evanrute Saarien. But Saarien, fresh out of prison for his misdeeds in Windswept, has just fabricated a new religion, positioning himself as its holy leader. He’s telling his congregation to go on strike, to fight the system. And unfortunately, they’re listening to him.

“Like a Boss is one of those rare, perfect novels that somehow packs huge ideas into a story that is simultaneously wildly speculative and completely digestible. Like a Boss lives up to its name. A masterwork of big ideas, perfectly executed.”
- Ted Kosmatka, author of The Flicker Men

Adam Rakunas has worked a variety of weird jobs. He’s been a virtual world developer, a parking lot attendant, a triathlon race director, a fast food cashier, and an online marketing consultant.
Now a stay-at-home dad, Adam splits his non-parenting time between writing, playing the cello, and political rabble-rousing. His stories have appeared in Futurismic and the Magazine of Fantasy and Science Fiction. Windswept is his first novel.
Posted by BARRY R. HUNTER at 12:02 AM