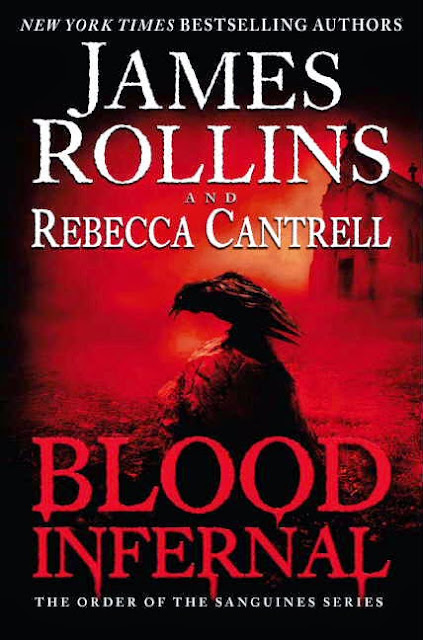 I wanted to let you know that the third installment and epic conclusion to the bestselling Gothic series, about an ancient order who speak the truth behind Christ’s miracles and strive to protect the world from evil - from New York Times bestselling authors James Rollins and Rebecca Cantrell, BLOOD INFERNAL (William Morrow, on sale 2/10/2015, $27.99, ISBN: 9780062343260).

In BLOOD INFERNAL an escalating scourge of grisly murders sweeps the globe, archaeologist Erin Granger must decipher the truth behind an immortal prophecy, one found in the Blood Gospel, a tome written by Christ and lost for centuries: The shackles of Lucifer have been loosened, and his Chalice remains lost. It will take the light of all three to forge the Chalice anew and banish him again to his eternal darkness. With the Apocalypse looming and the very barriers of our world crumbling, Erin must again join forces with Army Sergeant Jordan Stone and Father Rhun Korza to search for a treasure lost for millennia, a prize that already has fallen into the hands of their enemy.

But the forces of darkness have crowned a new king, a demon named Legion, who walks this Earth wearing many faces, whose reach is beyond measure, where even the walls of the Vatican fall before him. For any hope of saving the world, Erin must discover the truth behind man’s first steps out of the Garden of Eden, an event wrapped in sin and destruction, an act that damned humankind for eternity.

The search for the key to salvation will take Erin and the others across centuries and around the world, from the dusty shelves of the Vatican’s secret archives to lost medieval laboratories, where ancient alchemies were employed to horrific ends. All the while, they will be hunted across the breadth of the globe, besieged by creatures of uncanny skill and talent. As clues are slowly dug free from ancient underground chapels or found frozen in icy caverns high in the mountaintops, Erin will discover that the only hope for victory lies in an impossible act, one that will not only destroy her, but all she loves. To protect the world, Erin must walk through the very gates of Hell and face the darkest of enemies, the adversary of humankind, the very serpent in the garden. She must confront Lucifer himself.

With The Blood Gospel, the first novel in the Order of the Sanguines series, James Rollins and Rebecca Cantrell breathtakingly combined science, myth, and religion and introduced a world where miracles hold new meaning and the fight for good over evil is far more complicated than we ever dreamed. And now in this conclusion to the Sanguines trilogy, BLOOD INFERNAL, they take us to the very pit of Hell itself, making us peer into the abyss and face our greatest fears, answering the ultimate question: What price will we pay for true salvation?

JAMES ROLLINS is the New York Times bestselling author of international thrillers translated into more than forty languages. His Sigma series has been lauded as one of the “top crowd pleasers” (New York Times) and one of the “hottest summer reads” (People Magazine). Acclaimed for his originality, Rollins unveils unseen worlds, scientific breakthroughs, and historical secrets--and he does it all at breakneck speed and with stunning insight. Find James Rollins on Facebook, MySpace, Twitter, and at www.jamesrollins.com.

REBECCA CANTRELL is a New York Times bestselling thriller author. Her novels include the award-winning Hannah Vogel mystery series, and the critically-acclaimed YA novel, iDrakula, was nominated for the APPY award and listed on Booklist’s Top 10 Horror Fiction for Youth. She, her husband, and son have left Hawaii’s sunny shores for adventures in Berlin. Find Rebecca Cantrell on Facebook, Twitter, and at www.rebeccacantrell.com
Posted by BARRY R. HUNTER at 9:51 PM