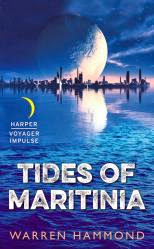 is a fast-paced standalone sci-fi novel in the vein of Scalzi’s OLD MAN’S WAR and Walter Jon Williams’ CONVENTIONS OF WAR (full press release below).

The newest sci-fi novel from Warren Hammond (author of the KOP series), called TIDES OF MARITINIA (on sale in e-format Dec 2, in print Jan 6).

In TIDES OF MARITINIA, author Walter Hammond thrusts readers into Maritinia, a far-flung planet on the outskirts of the omnipresent Empire. Maritinia is a planet of little consequence; its people are purposefully deprived of technology as a means of government control, its economy rests precariously on the export of kelp… and a group of rebels have just staged a coup.

In spite of the planet’s status, the Empire needs to regain control. Naturally, they send Jakob Bryce, a hapless paper-pusher who has somehow become a secret agent of the Empire, with a simple mission: assassinate and replace one of the rebel conspirators, immerse himself in the inner circle of “New” Maritinia, and sow enough discord to bring down the unstable rebellion and make way for Empire troops to come in and clean house.

Hammond expertly constructs a vibrant world in TIDES OF MARITINIA, filled with brilliant detail, colorful characters, and a layered universe of class, politics, religion and warfare.