The Ten Thousand by Paul Kearney

The Ten Thousand
By Paul Kearney

Revisit the world of the Macht on
13th February (UK & Ireland) 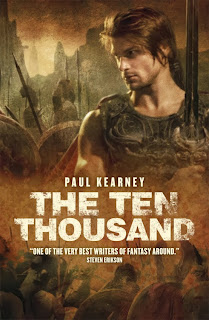 
“One of the very best writers of fantasy around” – Steven Erikson

A stirring story of invasion, defeat and the victory pulled from its jaws – this is the beginning of Paul Kearney’s celebrated Macht Trilogy, now reissued in a larger format!

On the world of Kuf, the Macht are a mystery, a seldom-seen people of extraordinary ferocity and discipline whose prowess on the battlefield is the stuff of legend. For centuries they have remained within the remote fastnesses of the Harukush Mountains. In the world beyond, the teeming races and peoples of Kuf have been united within the bounds of the Asurian Empire, which rules the known world, and is invincible.

The Great King of Asuria can call up whole nations to the battlefield. His word is law. But now the Great King’s brother means to take the throne by force, and in order to do so he has sought out the legend. He hires ten thousand mercenary warriors of the Macht, and leads them into the heart of the Empire.

Now in a larger B format edition, this series will delight fans of George RR Martin and Stephen R. Lawhead!

Paul Kearney is the critically-acclaimed author of The Monarchies of God and the Sea Beggars series. He has been long-listed for the British Fantasy Award.