A Different Kingdom by Paul Kearney 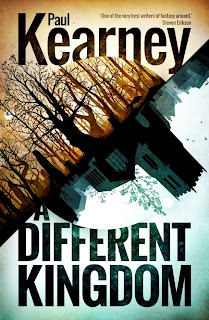 A Different Kingdom
By Paul Kearney


“An utterly splendid piece” – Interzone
'Paul Kearney remains one of the most criminally underrated
authors working in the genre today.' – Tor.com

Paul Kearney is one of the most vital voices in fantasy and now the master of the genre returns with his masterpiece – A Different Kingdom.

Michael Fay is a normal boy, living with his grandparents on their family farm. In the woods—once thought safe and well-explored—there are wolves; and other, stranger things. Then one day he finds himself in the Other Place. There are wild people, and terrible monsters, and a girl called Cat.

When the wolves follow him from the Other Place to his family’s doorstep, Michael must choose between locking the doors and looking away—or following Cat on an adventure that may take an entire lifetime in the Other Place. He will become a man, and a warrior, and confront the Devil himself: the terrible Dark Horseman...

Set in rural Ireland, A Different Kingdom is an incredible novel about the thin lines between this world and the next. A unique and stunning tour de force that will reinvigorate your love of the fantasy genre.

Paul Kearney is the critically-acclaimed author of The Monarchies of God and the Sea Beggars series. He has been long-listed for the British Fantasy Award.