The Resurrectionist of Caligo by Wendy Trimboli & Alicia Zaloga 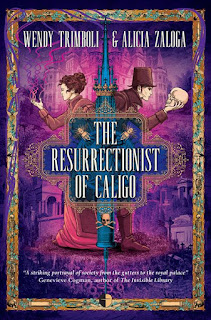 The Resurrectionist of Caligo by Wendy Trimboli & Alicia Zaloga

With a murderer on the loose, it’s up to an enlightened bodysnatcher and a rebellious princess to save the city, in this wonderfully inventive Victorian-tinged fantasy noir.

“Man of Science” Roger Weathersby scrapes out a risky living digging up corpses for medical schools. When he’s framed for the murder of one of his cadavers, he’s forced to trust in the superstitions he’s always rejected: his former friend, princess Sibylla, offers to commute Roger’s execution in a blood magic ritual which will bind him to her forever. With little choice, he finds himself indentured to Sibylla and propelled into an investigation. There’s a murderer loose in the city of Caligo, and the duo must navigate science and sorcery, palace intrigue and dank boneyards to catch the butcher before the killings tear their whole country apart.

An Angry Robot release.
Posted by BARRY R. HUNTER at 12:00 AM