CROSSROADS OF CANOPY by Thoraiya Dyer 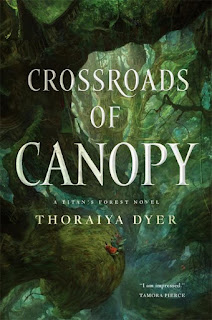 CROSSROADS OF CANOPY by Thoraiya Dyer

Crossroads of Canopy is the highly-anticipated fantasy debut from Aurealis and Ditmar Award-winning author Thoraiya Dyer, set in a giant mythical rainforest controlled by living gods.

But achieving greatness is more difficult than she thinks.

Her hopes rest on becoming the next bodyguard to Audblayin, the rain forest’s divine ruler of growth and fertility. But to earn that title, Unar must embark on a dangerous quest into the shadowy depths beneath the treetops. Down below, she must confront enemy tribesmen, battle notoriously giant monsters, and master frightening new magic.

Most importantly, Unar must forget all the truths she had sworn her life to uphold…and be willing to risk destroying the very home she loves to seize her destiny.

“Readers will be delighted by Dyer’s polished prose and an exquisite new world of intricate mythology, rituals, and politics.”—Publishers Weekly, Starred Review

“I am impressed. A unique, gorgeous, and dangerous world, a stubborn female hero, and a writer to watch!” —Tamora Pierce

“For her striking first novel Crossroads of Canopy, Thoraiya Dyer reworks the stuff of epic fantasy in ways that seem organic, rooted in the natural world but just as true to human experience.” —Locus magazine

THORAIYA DYER is a four-time Aurealis Award-winning, three-time Ditmar Award-winning Australian writer based in Sydney. Her stories have appeared in Clarkesworld, Apex, Analog, Redstone SF, Nature and Cosmos magazines, and anthologies, including War Stories, Long Hidden, and Cranky Ladies of History. Crossroads of Canopy is the first book in the Titan's Forest Trilogy.