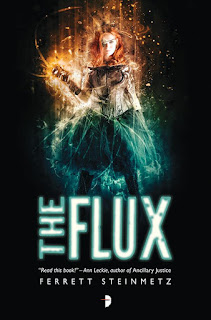 Well known for his eponymous blog, Ferrett's debut novel Flex was very well received - just read this review by Ken Liu: “Featuring one of the most original magic systems ever devised and a pair of likable, layered protagonists, Flex is a fast-paced, imaginative, and emotionally engaging adventure. The developing friendships and rapport among the characters are portrayed with sensitivity and avoids cliches, and the magical battle sequences are rigorous and filled with ingenious touches that will make gamers and tax lawyers alike grin with joy.” The Flux is set to follow suit; Ken raved about it, too.

Love something enough, and your obsession will punch holes through the laws of physics. That devotion creates unique magics: videogamemancers. Origamimancers. Culinomancers.

But when ‘mancers battle, cities tremble…

ALIYAH TSABO-DAWSON: The world’s most dangerous eight-year-old girl. Burned by a terrorist’s magic, gifted strange powers beyond measure. She’s furious that she has to hide her abilities from her friends, her teachers, even her mother – and her temper tantrums can kill.

PAUL TSABO: Bureaucromancer. Magical drug-dealer. Desperate father. He’s gone toe-to-toe with the government’s conscription squads of brain-burned Unimancers, and he’ll lie to anyone to keep Aliyah out of their hands – whether Aliyah likes it or not.

THE KING OF NEW YORK: The mysterious power player hell-bent on capturing the two of them. A man packing a private army of illegal ‘mancers.

Paul’s family is the key to keep the King’s crumbling empire afloat. But offering them paradise is the catalyst that inflames Aliyah’s deadly rebellious streak… 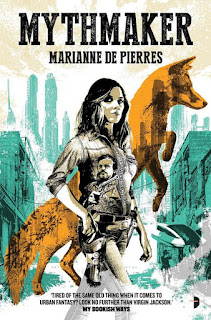 Australian author Marianne is available to chat about the second in her Peacemaker series, Mythmaker. A cli-fi novel set in the Australian outback - but not as we know it - the first book in the series was described in the New York Journal of Books as "a dystopia a little on the mythological and crime-solving side".

Virgin’s in a tight spot. A murder rap hangs over her head and isn’t likely to go away unless she agrees to work for an organisation called GJIC (the Global Joint Intelligence Commission).

Being blackmailed is one thing, discovering that her mother is both alive and the President of GJIC is quite another. Then there’s the escalation of Mythos sightings and the bounty on her head.
Oddly, Hamish is the only one she can rely on.