WASHINGTON - In response to the recently released VA Office of Inspector General (OIG) report that reviewed processes from June 6 through December 15, 2016 of the Veterans Crisis Line (VCL), the Department of Veterans Affairs released the following statement:

The Department of Veterans Affairs is proud to announce that the challenges with the Veterans Crisis Line have been resolved.

“Suicide prevention is one of our highest priorities,” said Secretary of Veterans Affairs David J. Shulkin. “Fixing the Veterans Crisis Line was a critical step in keeping our commitment to Veterans.”

To reach a trained VA professional who is specially trained to attend to emotional crises for Veterans and Servicemembers:

Chat online at https://www.veteranscrisisline.net/
Posted by BARRY R. HUNTER at 9:37 PM No comments:

The Dark Tower is coming 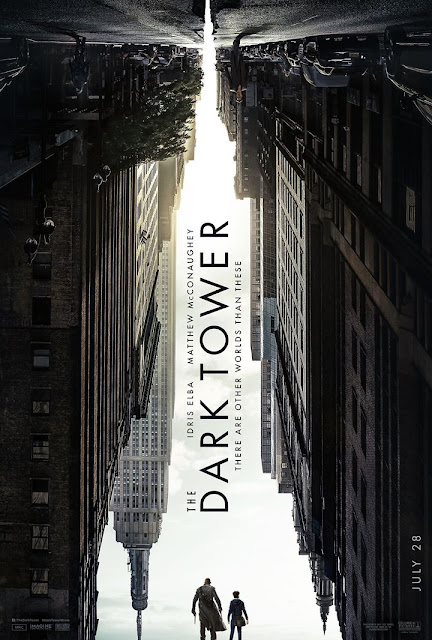 A Message from Liz Wrightson

It is with great sorrow that I must announce the passing of my beloved husband, Bernie. We thank you for all the years of love and support. His obituary is below:

After a long battle with brain cancer, legendary artist Bernie Wrightson has passed away.

Bernie “Berni” Wrightson (born October 27, 1948, Baltimore, Maryland, USA) was an American artist known for his horror illustrations and comic books. He received training in art from reading comics, particularly those of EC, as well as through a correspondence course from the Famous Artists School. In 1966, Wrightson began working for The Baltimore Sun newspaper as an illustrator. The following year, after meeting artist Frank Frazetta at a comic-book convention in New York City, he was inspired to produce his own stories. In 1968, he showed copies of his sequential art to DC Comics editor Dick Giordano and was given a freelance assignment. Wrightson began spelling his name “Berni” in his professional work to distinguish himself from an Olympic diver named Bernie Wrightson, but later restored the final E to his name.

His first professional comic work appeared in House of Mystery #179 in 1968. He continued to work on a variety of mystery and anthology titles for both DC and its principal rival, Marvel Comics. In 1971, with writer Len Wein, Wrightson co-created the muck creature Swamp Thing for DC. He also co-created Destiny, later to become famous in the work of Neil Gaiman. By 1974 he had left DC to work at Warren Publishing who were publishing black-and-white horror-comics magazines. There he produced a series of original work as well as adaptations of stories by H. P. Lovecraft and Edgar Allan Poe. In 1975, Wrightson joined with fellow artists Jeff Jones, Michael Kaluta, and Barry Windsor-Smith to form “The Studio,” a shared loft in Manhattan where the group would pursue creative products outside the constraints of comic book commercialism. Though he continued to produce sequential art, Wrightson at this time began producing artwork for numerous posters, prints, calendars, and coloring books.

Wrightson spent seven years drawing approximately 50 detailed pen-and-ink illustrations to accompany an edition of Mary Shelley’s novel Frankenstein, which the artist considers among his most personal work. Wrightson drew the poster for the Stephen King-penned horror film Creepshow, as well as illustrating the comic book adaptation of the film. This led to several other collaborations with King, including illustrations for the novella “Cycle of the Werewolf,” the restored edition of King’s apocalyptic horror epic, “The Stand,” and art for the hardcover editions of “From a Buick 8” and “Dark Tower V.” Wrightson has contributed album covers for a number of bands, including Meat Loaf. The “Captain Sternn” segment of the animated film Heavy Metal is based on the character created by Wrightson for his award-winning short comic series of the same name.

Characters he worked on included Spiderman, Batman and The Punisher, and he provided painted covers for the DC comics Nevermore and Toe Tags, among many others. Recent works include Frankenstein Alive Alive, Dead She Said , the Ghoul and Doc Macabre (IDW Publishing) all co-created with esteemed horror author Steve Niles, and several print/poster/sketchbooks series produced by Nakatomi.

As a conceptual artist, Bernie worked on many movies, particularly in the horror genre: well-known films include Ghostbusters, The Faculty, Galaxy Quest, Spiderman, and George Romero’s Land of the Dead, and Frank Darabont’s Stephen King film The Mist.

Bernie lived in Austin, Texas with his wife Liz and two corgis – Mortimer and Maximillian. In addition to his wife, he is survived by two sons, John and Jeffrey, one stepson, Thomas Adamson, and countless friends and fans. A celebration of his life is planned for later this year. (Reprinted from www.BernieWrightson.com.

I first met Bernie in 1978 when "The Studio" were guests at DeepSouthCon in Atlanta. It was an art based convention (imho) due to the number of artists in attendance. In addition to The Studio, Micheal Whelan and Roger Dean were guests, and I ran around like a drooling, dumbfounded fan-boy. I have never attended another Convention that featured as many NAME artists, and that includes many DragonCons. Bernie was a fantastic artist and person. The world is a poorer place without him in it.
Posted by BARRY R. HUNTER at 3:46 PM No comments:

In the third book in Viola Carr’s fantastically fun and wonderfully edgy Electric Empire novel, set in the gritty world of alternate Victorian London, Dr. Eliza Jekyll must team up with her secret other half, Miss Lizzie Hyde, as her world comes crashing to a halt when a madman begins targeting the city’s most important scientists, and sorcerers threaten all she holds dear.

Crime scene physician Eliza Jekyll is trying to share a life with her rebellious second self, Lizzie Hyde. But being two people in one body isn’t easy, not when Eliza has a professional reputation to protect and Lizzie is veering headfirst into a life of debauchery and crime with an increasingly demented Mr. Hyde. Not to mention the difficulty of making a respectable marriage with Remy Lafayette--Royal Society investigator and occasional lycanthrope--while Lizzie enjoys her own dubious romantic entanglements. And with England on the brink of war, Remy’s secretive mission in sorcery-riddled Paris grows ever more sinister. Has he been an enemy agent all along? Or is Eliza finally going mad?

Now, she’s confronted by her most baffling case yet: an evil genius with a penchant for theatrics is murdering eminent scientists in the most inexplicable ways. Her investigation uncovers a murky world of forbidden books, secret laboratories and bleeding-edge science punishable by death--and a shocking connection to her father’s infamous experiments. Desperate to learn the truth about her past, she must infiltrate a cabal of fanatical inventors bent on a discovery that will change the world--or destroy it.

With London under attack by sorcery-wielding terrorists, and the Royal Society’s enforcers determined to bury her evidence for good, Eliza needs all the friends she can get if she’s to thwart the killer and keep her head. But when Lizzie’s criminal shenanigans get Eliza fired from the Metropolitan Police, and Remy is implicated in an act of bloody vengeance he didn’t commit (or did he?), she’s on her own.

Except for wily, resourceful, mercurial Lizzie. But Lizzie’s got her own life now. And she’ll do anything to keep it. Even if it means attempting the unspeakable and finding her own body. Even if it means throwing Eliza to the wolves, and letting the world burn…

Viola Carr was born in Australia, but wandered into darkest London one foggy October evening and never found her way out. She now devours countless history books and dictates fantastical novels by gaslight, accompanied by classical music and the snoring of her slumbering cat. She likes steampunk, and thought it would be cool to investigate wacky crimes with crazy gadgets…just so long as her heroine was the creator of said wacky gadgets: a tinkerer, edgy, with a dash of mad scientist.
Posted by BARRY R. HUNTER at 12:23 AM No comments: