WASHINGTON, March 10, 2016 — After “exceptional work,” the U.S. military is authorized to begin integrating women across all occupations and specialties “right away,” according to a Defense Department statement released today.

In the statement, Carter said the department must handle the change “the right way, because the combat effectiveness of the world’s finest fighting force is paramount.”

The review was the culmination of years of studies and reports going back to 2011, when then-Defense Secretary Leon E. Panetta ordered an examination of all laws and policies governing the assignment of women in the armed forces.

Carter wrote a Medium post published today detailing his views on the implementation plans. It can be read here.

In the post, the secretary gave some behind-the-scenes details on what the studies and reviews turned up.

“We found over the last few years that in some cases we were doing things because that’s the way we’ve always done them,” Carter wrote. For example, he said, the 35-pound weight carried by marchers in their rucksacks during the Army’s Expert Infantry Badge qualification was based on a World War II-era airborne study.

“It was the minimum weight required to prevent the rucksack from getting tangled in a jumper’s static line, and had nothing to do with the equipment required for paratroopers to fight with once they landed -- let alone the modern equipment that infantry soldiers need to carry today,” Carter noted.

The study and work that has gone into opening all military jobs to women “drove us to take a closer look at our training, too,” the secretary wrote.

Carter wrote that the department’s performance standards are now informed by real-world operational requirements and the experiences gained in Iraq and Afghanistan. “As a result, our military will be even better at finding and training not only the most-qualified women, but also the most-qualified men, for all military specialties,” he wrote.

Carter has said throughout his tenure that the integration process will mean equal opportunity for, not equal participation by, women service members.

“ Integration provides equal opportunity for men and women who can perform the tasks required; it does not guarantee women will be promoted at any specific number or at any set rate, as adherence to a merit-based system must continue to be paramount,” the secretary wrote.

Carter noted, “We have to remember that it takes decades to grow a general or flag officer, so it will take time to see these results.”

WARRIOR WITCH is on the way 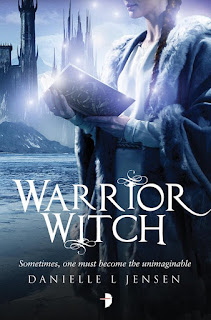 We're super excited to be able to share with you the final instalment of Danielle's Malediction trilogy, which has been showered with praise from the YA community and beyond. You can take a look at just some of the lovely things people had to say about the series below.

As always, please do remember to share your feelings on the novel with the world through your own blogs, GoodReads, Amazon or similar.


Sometimes, one must become the unimaginable…
Cécile and Tristan have accomplished the impossible, but their greatest challenge remains: defeating the evil that they have unleashed upon the world.
As they scramble for a way to protect the people of the Isle and liberate the trolls from their tyrant king, Cécile and Tristan must battle those who’d see them dead. To win, they will risk everything… and everyone. But it might not be enough. Both Cécile and Tristan have debts, and they will be forced to pay them at a cost far greater than they had ever imagined.


Everything is at stake, in the heart-stopping conclusion to the acclaimed Malediction Trilogy.

Praise for the trilogy:

“Amazing world building. Incredible writing. Awesome characters. No dull moments. Fierce and not-whiny-and-annoying heroine. And a swoon worthy Troll prince. Stones and sky! I was completely engulfed in the world of Trollus. It felt like I have been living inside its world throughout the entire time I’m reading this incredible book.”

“If you’re looking for a YA fantasy full of magic and mystery and intrigue and romance and wonderful, heartfelt characters that you could easily accept to be trapped under a mountain with, then don’t just read Stolen Songbird – inhale it. Deliciously written in two POVs that are deep and personal and completely intertwined with one another, this book is at once like hot chocolate on a rainy day with a cat on your lap, and a shot of something wicked when you’re feeling wired. There’s nothing I even remotely disliked, and a list as long as most Welsh train station names of things I loved. Stolen Songbird was a dream to read, a dream to adventure through, and a nightmare to leave. I didn’t want to wake up – and neither will you.”
– Jet Black Ink

Danielle was born and raised in Calgary, Canada. At the insistence of the left side of her brain, she graduated in 2003 from the University of Calgary with a bachelor’s degree in finance.
But the right side of her brain has ever been mutinous; and in 2010, it sent her back to school to complete an entirely impractical English literature degree at Mount Royal University and to pursue publication. Much to her satisfaction, the right side shows no sign of relinquishing its domination.